Library of the Planetary Emergency

This collection of significant peer-reviewed papers, from major journals and by leading scientists, is designed to help convince you of 1250’s positions. The first part – what could be dubbed a “catastrophe library” – paints a highly authoritative picture of a dire situation. In the second section a variety of papers and articles of similarly high caliber suggest why 1250’s proposals could help alleviate the situation. 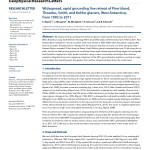 Rignot et al, in this 2014 GRL paper further support this through direct physical observation, showing that core structural glaciers of the WAIS are now fated to collapse, only the timing remains unclear

This Schuur et al Nature Comment, 2012, was based on a survey of 41 world experts and suggested high likelihood of major added carbon to the climate system from permafrost melt by 2040

This 2015 PNAS paper by Fu et al looks at factors leading to Amazon dieback, one of the major tipping points

Lenton et al in this PNAS 2007 paper looked at the issue of defining tipping elements as a whole, and evaluated policy-relevant tipping points

Levermann et al, 2012, in Climatic Change is intended to focus on Europe, but is a highly readable account of major global tipping point dangers

‘Venus Syndrome’ is not about to happen, but Hansen’s Making Things Clearer, 2013, shows why a ‘mini-runaway’ hyperthermal event is a real risk

From Paleoclimate to Future Catastrophe

Paleocene climate was quite unlike ours, but still concerning is this Wright and Schaller 2013 PNAS paper suggesting the PETM’s carbon might have been emitted incredibly rapidly and violently

Schmidt and Shindell, 2003, explored whether the PETM warming could have been driven by methane hydrate, modelling the late Paleocene atmosphere, and found that it could

Kurten et al, Atmospheric Chemistry and Physics, 2011, looks at how a large increase in methane could have double the projected warming through OH suppression and cloud changes

Climate Catastrophe – not a paper, but a 2007 New Scientist article from Hansen that lays out the scope of our dilemma

Can We Defuse the Global Warming Time Bomb? a decade-old Hansen article, but still all too current, from Scientific American, March, 2004

Hansen et al, Dangerous Human-made Interference with Climate, 2007, looks at “DAI” standard and why more than 1C above 2000 is dangerous

While not a peer-reviewed publication, David Wasdell here strongly lays out the case in favor of Earth System sensitivity

Climate Sensitivity Estimated From Earth’s Climate History – initially this Hansen/Sato 2012 paper is close to the Royal Society one above, but stays closer to issues of Earth System sensitivity

Hansen and Sato, 2011, Paleoclimate Implications for Human-Made Climate Change suggests that paleoclimatic data indicates the 2C plan is a “prescription for disaster.”

This Report from the WWF, Arctic Climate Feedbacks: Global Implications although now half a decade old, provides an excellent primer on the topic

This Royal Meteorological Society paper of Cowtan & Way shows data gaps led to an under-counting of Arctic warming, with broad implications for all other Arctic issues, for the notion of a warming “pause,” and for understanding the planetary energy imbalance

Hudson, 2011, Estimating the Global Radiative Impact of the Sea-Ice-Albedo Feedback in the Arctic, highlights the potent and accelerating feedback loop and heating stemming from sea-ice losses

Francis and Vavrus, 2012, GRL, an often cited paper on the role of Arctic warming in the extreme weather that has been growing in mid-latitudes

This 2015 Nature Climate Change paper by Najafi et al suggests that Arctic cooling from aerosols has been larger than global mean aerosol cooling, with important implications for the Arctic’s future

Sloan and Pollard, from GRL, 1998, look at polar stratospheric clouds in paleoclimate, and their importance in high-methane periods from the past – and possibly the future

This Schaefer et al 2014 paper in ERL, far more conservative than Schuur above, still notes the grave weakness of IPCC AR5 and its unwise exclusion of permafrost carbon

Euan Nisbet’s 2002 Royal Society paper looks at evidence for the methane-led hypothesis, exploring methane’s climate role in the relatively recent past and possible near future

Schmidt and Shindell explored whether the PETM warming could have been driven by methane hydrate, modelling the late Paleocene atmosphere, and found that it could

Sergienko et al, 2012, in Oceanology, look at the possibility of the the Eastern Siberian Shelf hydrate to generate a methane catastrophe

This 2011 Isaksen et al paper explores the impact that indirect effects of large Arctic methane releases could have, adding to their direct effects

Damm et al in this 2010 Biogeosciences paper look at the paradox of aerobic methane production in Pacific-derived surface waters, a methane source that could increase quickly with loss of sea-ice

Shakova and Semiletov, 2006, in Journal of Marine Systems explored the mixed sources of ESS methane supersaturation

This Shakhova & Semiletov 2010 powerpoint from the Opening the Arctic conference in Washington, D.C. is a good introduction to their research

This Shakhova & Semiletov 2012 powerpoint is from the EGU General Assembly, and adds to the prior one more information on isotopic analysis of ESS methane

This 2013 Nature Commentary by Whiteman, Hope and Wadhams generated both attention and controversy, suggesting the 50 Gt methane scenario would cause $60 trillion in damages

Fisher et al, 2011, in GRL discuss the variability of hydrate fractionation and how now “there may also be significant input from East Siberian Arctic Shelf emissions”

David Archer, 2007, from Biogeosciences, recasts the same hydrate material from the foregoing

Thorpe et al in Remote Sensing, 2013, examine a data filtering technique using AVARIS technology that gets around some of the problems that have plagued satellite CH4 data in the past

It is important to emphasize that none of these papers and reports focuses on non-CO2 reductions instead of CO2 cuts, but rather in parallel with them. They are complementary.

Hansen’s original PNAS paper on the alternative scenario, which explored how non-CO2 reductions could keep warming in safe limits – but failed because of large subsequent CO2 increases

Shindell et al, from Science, 2012 concerns the same material as the UNEP/WMO report above, which he chaired

Hansen’s talk in Copenhagen, 2009 on non-CO2 re-contextualized the “alternative scenario” material given the increases in CO2 emissions since 2000

MacCracken, 2009, shows what a combined CO2 and non-CO2 approach could achieve, and that it could be tied in with differentiated responsibilities among countries

Shoemaker et al, Science, 2013, looks at the need for “parallelism” between CO2 and non-CO2, and discourages trading between them, except for some of the crediting to developing nations like that proposed in MacCracken above

This 2014 letter to key U.S. policymakers from a range of leading scientists involved with methane including NASA’s Shindell, explains the need to move away from using the 100 year Global Warming Potential in methane policy

Quinn et al, 2008, in Atmospheric Chemistry and Physics, looked at how non-CO2 factors impact the Arctic in particular

Untapped Potential, this April 2015 Lester et al policy paper from the Rhodium Group on methane reductions from the gas & oil industry gets down to the level of the largest individual companies involved

From Global Geoengineering to Soft Intervention

One of the great false dichotomies of the new century is between those who think humanity can and should “control the global thermostat” through geoengineering, and those who think that technology should be left idly by in the midst of a calamity created by that technology, while nevertheless still remaining a technological society. Such arguments are appealing to many, but they leave out most of reality, which lies in the vast area in the middle. This section ends with the recent National Academy of Sciences Report on geoengineering, which noted the importance of continued research on geoengineering, a position 1250 strongly agrees with, but aside from it and the Royal Society review of marine cloud brightening, the few selections that follow are intended to suggest that vast and little-discussed middle ground.

Stolaroff et al, 2012, in Environmental Science & Technology looks at the feasibility of technological amelioration of catastrophic Arctic methane outbursts, and ties this in with ordinary methane mitigation 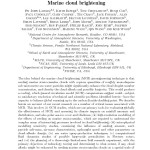 The Royal Society published this review in 2012, by Latham et al, of marine cloud brightening, generally considered one of the most promising SRM methods

From the Origins to the Future of the Earth System Viewpoint

These final papers might seem out of place, but they are not. They represent the foundations and leading edge of how science views life on a self-regulating planet. In 2001 the debate over planetary self-regulation largely ended, when more than 1,000 scientists from over 100 countries under UN aegis signed the Amsterdam Declaration on Global Change, which begins, “The Earth System behaves as a single, self-regulating system.” The Neo-Darwinians were accurate in maintaining that the self-regulation proposed by Gaia theory was incommensurate with their world operating through natural selection alone and random changes alone: of course, they did not recognize that this simply clarified the limitations of the Neo-Darwinian paradigm. What follows sketches out the path of the new paradigm. The rest will be history – we had better embrace it quickly.

This first Lovelock and Margulis paper, from Tellus, 1973, if not yet mature, represents a starting point for the modern concept of a self-regulating “Earth System”

By the 1980s, Lovelock describes Daisyworld modeling to show self-regulation in accordance with natural selection, and describes feedback processes as regulating global climate

Almost 30 years ago, Geophysiology is proposed by Lovelock as a way of both understanding and addressing our current problems in line with planetary self-regulation

Gilbert et al, 2012, Quarterly Review of Biology: this paper and the next both present a new paradigm for biology in the 21st C., in line with the work of Margulis’ work on symbiosis, with vast implications for the feedback-driven view of climate presented here

McFall-Ngai and almost 30 coauthors, in PNAS, 2013, look at a “vast and exciting new frontier” in biology growing out of the work of Margulis, again, with implications for understanding whole ecosystems and the Earth System as well