The number 1250 is a near-term interim target for atmospheric concentrations of methane (1250 parts per billion) akin to the long-term 350 (parts per million) stabilization target for CO2.

The non-CO2 forcings deserve emphasis comparable to that placed on CO2.

Expected difficulties in slowing the growth rate of CO2 and eventually stabilizing atmospheric CO2 amount make the non-CO2 forcings all the more important.

We are in a planetary climate emergency. As in all emergencies, the order and timing of our responses will become critical.

According to some of the world’s preeminent sea ice experts, one of whom has been a member of this group, the Arctic summer sea ice minimum could rapidly drop to near-zero (i.e., with September minima of 1 million square kilometers or lower) any year now. Because of the immense stores of methane and other carbon sources locked in the frozen Arctic, the dramatically accelerating input of summer insolation into the Arctic ocean as more and more of the summer sea ice disappears, and possible interconnections between these Arctic changes and increased weather disruption at the mid-latitudes where so many humans live, the risks of allowing the Arctic to melt unchecked are becoming untenable. Something must be done.

1250 was created to help increase awareness of, and contribute to the development of, intelligent and well-informed near-term climate strategy to help alleviate this aspect of the climate crisis, without interfering with the transformation of energy, transport or agricultural systems, or other needed actions to achieve immediate and dramatic cuts in our emissions of CO2. In this way, 1250 provides a vital component missing from the ‘350 movement.’ 1250 is not just an advocacy group for methane cuts, moreover. Rather, it was created to increase focus on near-term climate as a whole, and on the remaining practical pathways to constructing a ‘climate bridge’ to a stable future.

Steep black carbon cuts, for example, will also be essential to building such a ‘climate bridge.’ Important to note is that the non-CO2 contributions to current warming taken together still exceed those of CO2 (they actually total about 57% of warming since industrialization), so there is considerable potential to alleviate our immediate situation through these means, and black carbon cuts in particular could bring their benefits very quickly and attenuate the accelerating Arctic crisis.

Unfortunately, however, even the most rapid reductions of black carbon, methane and other non-CO2 components (in addition to ambitious CO2 cuts, of course), emissions reductions alone will not long be able to keep the rapidly shifting Arctic stable. 1250 thus also advocates an immediate, holistic Arctic ‘rescue package,’ including mild, local engineered interventions. We agree fully with the goals of Greenpeace and their ‘Save the Arctic’ program, but apart from pledging to keep out fossil fuel interests, Greenpeace has never proposed how they would save it.

If the Arctic is left to keep melting, moreover, it will become well-nigh impossible to stop the fossil industry from moving in, making this one the largest societal tipping points of our time. Either we move in the direction of 1250 – which demands a change of consciousness about the plurality of climate change causes and cures – or we will quite likely slide inexorably into catastrophe, even if positive steps are taken to move towards clean energy and lower CO2 emissions. 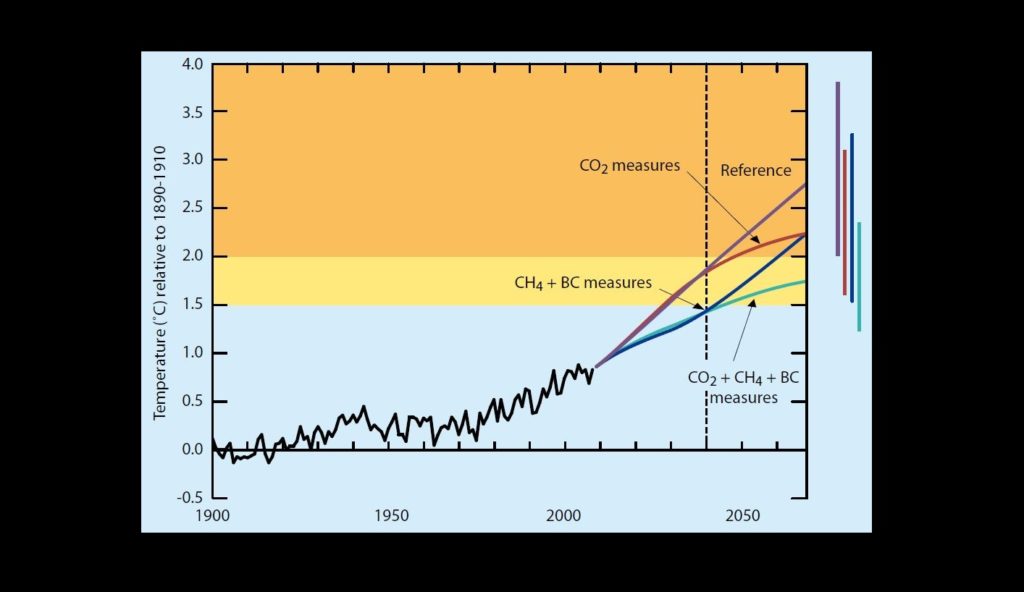 The above graph captures better than any other the vast importance of methane and black carbon cuts to near-term climate strategy. As can be readily seen, for about thirty years, any reductions in warming will largely need to come from non-CO2 sources. If you look, methane plus black carbon cuts (blue line) perform as well as doing everything (i.e., CO cuts plus methane and black carbon cuts – the green line) until about 2040 (dotted vertical line), whereas very ambitious CO2 cuts all by themselves are no better than doing nothing at all until the same time 2040 horizon. Only after about 60 years do the CO2 cuts alone begin to perform better than the methane/black carbon cuts alone. Published in 2011, the graph can be updated simply by pushing the 2040 dotted line of divergence out to 2050, but otherwise remains exceptionally valid and vital.

The World Meteorological Organization is the only world scientific body considered to have higher authority in climatology than the United Nations IPCC, and this Assessment report was led by Drew Shindell, Chair (NASA GISS), a leading expert in methane’s climate impacts, along with a large expert consultative group, a group of important Vice-Chairs led by preeminent black carbon expert Veerabhadran Ramanathan, many coordinating authors, dozens of lead authors, dozens of contributing authors, and an extremely large number of review editors and external reviewers, making it by far the most authoritative study of this material to date.